Calling all recallers to return their completed sheets to an official event (locations/times below) or mail to: NoLaToya
PO Box 750788
New Orleans, La
70115

How to find your ward and precinct.

Page 2 is for collecting signatures and should be filled out following the specific guidelines detailed above.

Things to think about when you are considering whether you want more Latoya:

The mayor LITERALLY hasn’t been working!

- CRIME: Residents have asked for an effective crime plan since at least January 2022. We received a redeployment plan from two New York officers. Where’s the community policing plan?

- Police staffing shortages due to low morale and bad leadership

- Retaliation towards residents and businesses

- The inequity with enforcement under Claiborne Bridge

- Lights around the city out

Affordable housing has received an F for the past THREE YEARS

- NORD working so it benefits all residents

- Issues with SWB billing (mayor is president of board)

- Giving up money through Wisner trust

- Capitol projects not moving. She's not around to move them

- Not responding to the rape in the French Quarter

These are a few of the reasons she needs to go and we're sure you can add more… Sign the recall.

We have a voice and we want a choice.

We are greater than she!

Your donations are used directly for getting the word out to get signatures. We are a completely non-profit, volunteer organization that has to report all activities to the Louisiana State Ethics Board. We are working for all of us

If you would rather just send a check.
Make payable to NoLaToya and mail to:
NoLaToya
PO Box 750788
New Orleans, La
70115

DONATIONS ARE NOT TAX DEDUCTIBLE

Volunteer! We need you!

We need you at our signing events and we need your skills!

We need folks to help at our signings! If you have time or talents you would like to share, we would love to hear from you! We are looking for some social media gurus to help promote our mission, fund raisers, tech experts and very soon people to gather signatures those 54,000 signatures!

How To Throw Your Own Signing Party & Print Documents You Will Need!

What is a Recall Party? Recall Parties are your events to get signatures for the Recall of LaToya Cantrell and you are in charge of getting volunteers, promoting your event through your social media, setup and break down. We are here to help but this is your party. -A party can be in public places (parks, playgrounds, neutral grounds of busy intersection, outside of large events or festivals). Businesses must provide consent if held at one. -A party can be in your neighborhood for just your neighbors and/or the public -A private party can be held at social or neighborhood organization -A party can be at your home for invited guests How to Host a Signing Party Contact us and let us know where your party will be. Let us know what type of party you are planning and the details (where, when, how many volunteers and a good time for a planner to give you a call to discuss your party). Schedule a time to come to one of our events to observe, train and pick up your Recall Success Packet. The process of collection signatures matters and must be done correctly Once the details have been finalized with your party planner and your event has been added to the website please promote every way you can After your event, turn in your signature pages ASAP

The Process Matters! Make sure your signatures count.

THE MOST IMPORTANT PART: How to Properly Collect Signatures


-Every signature must be verified through the QR code OR a voter’s registration card AND a state-issued ID or driver's license.
-The first block is for their signature. They should sign as they would sign when signing to vote
In the next block, they will print their name exactly as it appears on the voters’ registration that has been confirmed with the QR code
-The next block is ONLY the year of birth.
-The current date (date of signing) must be in month/day/year format.
-They must include the full mailing address as it appears on their registration. New Orleans and the zip code must be included (if they have moved recently and are planning to change their registration, ask them to change it and then come back later to sign).
-Last, you will sign as a witness (ONLY ORLEANS PARISH REGISTERED VOTERS CAN WITNESS SIGNATURES).


Please email: LetsRecallLatoya@gmail.com If your would like to volunteer at signing parties, with any questions or to make arrangements to deliver signed petition pages. 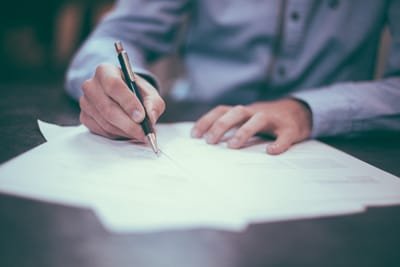 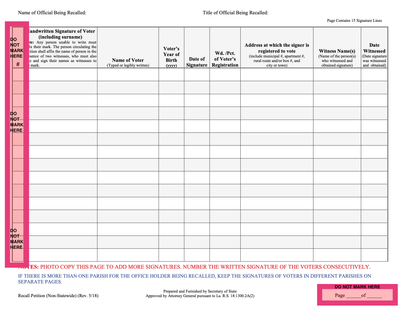 What happens after the appropriate number of signatures are collected:

The petition is submitted to the Registrar of Voters' Office for certification.

The Registrar of Voters certifies the petition within 20 working days after it is presented to them.

The petition is forwarded to the governor. The governor issues an election proclamation within 15 days of receipt of the petition.

The recall goes to vote (primary election). If the recall passes, the mayor is recalled and the office is vacated.

Because Cantrell's unexpired term exceeds one year, council members will vote to appoint one of the two council-members-at-large to be acting Mayor during the period from the occurrence of the vacancy until a new mayor is elected and assumes office.

A special election will be held and a new mayor will be voted into office.  The recalled official cannot be a candidate in the special election to fill the vacancy. In other words, LaToya Cantrell cannot run again.